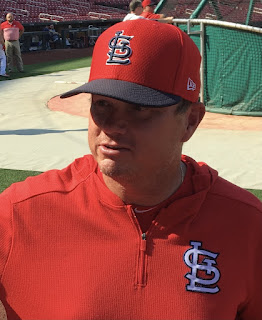 Back in June of 2018, my son graduated high school on a Thursday. He wasn’t feeling well, but he played his final high school baseball games two days later on Saturday. Two days after that he was in the hospital, and two days later, he was diagnosed and began treatment for acute lymphoblastic leukemia.
The next month, Mike Shildt took over as manager of the Cardinals. That September when they visited Detroit, we got the opportunity to meet him before a game. He couldn’t have been more kind, not just talking with Jack, but really listening to him. Just a few hours before his team was to take the field, battling for a wildcard spot, it was clear that he truly cared about the 18-year old Cardinals fan he had just met.
What Shildt did next amazed me. He gave Jack his personal phone number and told him that if Jack ever was having a particularly tough day, or if he was having a great day he wanted to celebrate with someone, he should give Mike a call. Then, to underscore the fact that he really meant it, and that Jack shouldn’t worry about bothering him, he said, “The only way I’ll be upset with you is if you don’t call.” Then, when Jack hadn’t called him for a week, Mike called Jack to check on him. He has since remained in touch with Jack, calling on occasion and texting back and forth with him as recently as yesterday.
Today, the news broke that the Cardinals fired Shildt. In two days, this Saturday, Jack will take his final dose of chemotherapy, his three-plus years of treatment almost perfectly overlapping with Mike’s tenure as the Redbirds’ manager. I am of course thrilled to see Jack’s treatment come to a conclusion. At the same time, I am saddened to see Mike’s time with the Cardinals end. I am sad because my favorite team is parting ways with a manager who won a National League Manager of the Year Award, overcame numerous obstacles to lead his team to the playoffs in three straight seasons, and just weeks ago led them to a franchise-record 17-game winning streak (the longest such streak in the NL in 85 years).
Even more than that though, I am sad for him. Having spent his entire eighteen years in professional baseball with the Cardinals organization, he must now look for a new employer, after holding the job he considered himself so blessed to have. I wish him the best. He’s a good manager. He’s an even better man. I will forever be a Cardinals fan, but I will definitely also root for any team that he leads. Godspeed, Mike Shildt.
Posted by Pete Scribner at 7:09 PM

Welcome to Polyester and Astroturf

I have been a sports fan in general and a baseball fan in particular for as long as I can remember. One of my most distinct early childhood memories is of my mom taking me to Busch Stadium, where we would sit in the left field bleachers and watch our favorite player, Lou Brock.

Sunday afternoon games were when they'd have the giveway games for kids such as Hat Day, Ball Day, or Bat Day (a lawsuit waiting to happen), so that's when we usually went. We would go to the 8:00 church service, make a sack lunch, and go wait for the gates to open so that we could be among the first to enter, ensuring us a front row seat.

I suppose it was these experiences that birthed my love for baseball as well as my love for baseball memorabilia. In later years, as teenagers, my friend Craig and I would spend the entire day at the stadium, getting autographs of players before and after the game. We waited for the Cardinals in the parking garage or we'd go down the street and stake out the visiting team's hotel lobby.

Over the years, I added to these mementos various souvenirs and other items. When my wife and I bought our first house, I had a room in the basement that she graciously allowed me to turn into my "sports room." In it I displayed much of the memorabilia I had collected over the years. Most of it had only sentimental value, but it was fun to relive the memories every time I entered the room.

In 2006, we moved to Flint, Michigan. Unfortunately for me, the house we purchased did not have an extra room for my stuff, and as a result, most of it has remained boxed in our basement ever since. I started this blog as a means of remembering and sharing. Remembering what I had, and remembering the events connected to those items; and sharing in this space both those items as well as my thoughts about them.

The color scheme of the blog is very intentionally patterned after the Cardinal road uniforms of the late 70s and early 80s. For some reason, baby blue was in vogue, and the color always evokes memories of this era for me. Much the same, polyester and astroturf were staples at the time, hence the title of the blog.

I hope you enjoy my trip down memory lane...I know I will. And please feel free to share your comments as well.